We have our new parents ‘meet and greet’ at 5pm in the Performing Arts area this coming Thursday, 29 August followed by ‘meet the teacher’ sessions starting at 6pm.

Please refer to the below table to see when your child’s classroom teacher is presenting and when the information sessions (whole school presentation by LMT/Specialists) are being offered in the hall.

I look forward to seeing you all on Thursday night. 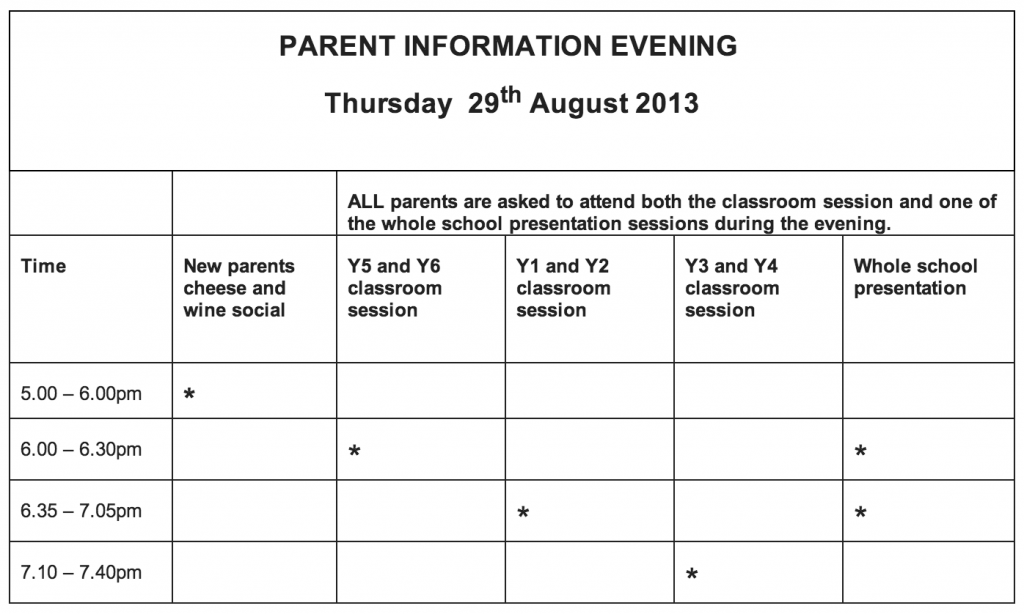 Parents can now log into Gateway to book the “you tell us” session.  The “you tell us” sessions are designed to provide parents with an opportunity to talk to their child’s teacher for 10 minutes about their child.  There will be no teacher input just an opportunity for you as a parent to talk to the teacher about the strengths, areas to develop, interests and nuances that make your child unique.

You will receive a letter from your classroom teacher(s) and as part of this letter is a survey form for you to complete before your scheduled meeting.  This survey or questionnaire simply asks questions about your child and acts as a prompt for the meeting.

You can download the survey/questionnaire by clicking – You Tell Us Parent Survey.

Please note that the evening session for all year groups is to be held on the afternoon/evening of Thursday 5 September.

We have welcomed Abbie Tsang to our Chinese Team and she was impressed with how the children responded to her challenges in class last week.  Abbie joins us from Beacon Hill School where she was a classroom teacher.

With the addition of Abbie to our team we have taken the opportunity to make a change to our structure.  Instead of the children being mixed as a year group we are trialling the children staying in their home classroom.  This means that 4M children will stay in 4M and 4F will stay in 4F were as in the past these two classes would be mixed.  They were mixed as children where put into a 3 pathways across the two classrooms.  We have decided to keep them in their home classrooms this year as a trial.

The idea of splitting the children into 3 pathways (Pathway 1, 2 and 3) may work well for larger schools but as we have only two classes per year group we are effectively splitting two classes into 3 pathways (instead of the idea being where the children are split 1 x Pathway One, 1 x Pathway 2 and 1 x Pathway 3).  The concept works well for schools who have a wide range of abilities but a vast amount of our children are in Pathway 1 meaning that we usually have pathway 1-3 in the same classroom anyway.

The major advantage of this trial is that both Abbie and Mary and the whole department can plan collaboratively.  They can do this as they are teaching the same pathways (1-3) to the same year groups.  In the past this has not always been possible as the teachers were teaching different content as appropriate depending on which pathways they were teaching.

Glenealy School, when I was there as VP, moved from splitting the children into Pathways to keeping the children in their home classrooms and this has proved very successful.  They have continued to teach in their home classrooms and their head of Chinese and Principal both see this move as crucial in terms of the success of their Chinese program.

Our team will differentiate to ensure the children are exposed to work at their level and this is the most important aspect.  We will trial this until the end of the first term and then evaluate its effectiveness to determine what happens in Term 2 and beyond.

You may find the site useful to locate applications that will support your child’s learning.  There are a wide range of applications across all the subject areas and each application has been reviewed by the site.

You can jump to the site by clicking HERE.