The learning technologies team, led by Craig Hollingsworth, are piecing together all five cameras that filmed The Magic Flute.  As you can appreciate this is 7.5 hours of footage they are trying to condense into 1.5 hours by using the best shot/angles from each camera.  It is very time consuming and my thanks to Stefanie, Gaylord and Craig for working on this.

We are delighted to announce that The Magic Flute – Part 1 – 4  are now available (it’s like a mini series)!

Please find below the results from our recent CIS Parent Survey.

WHAT IS WORKING WELL – WWW

We are very proud of the responses as the key ingredients of being a successful school have received a very positive response.  These areas include

EVEN BETTER IF – EBI

As a school the information has been useful to find areas that we can improve on.  We had 4 questions scoring lower than an 85% response of agree or strongly agree.  The 4 questions (see bottom of table below) relate to knowing the children before they enter Peak School, the bus system, community service and reviewing the School Mission and Vision.

We are also focusing on those questions that received a 85%-90% response rate of agree or strongly agree.  Whilst this is a very high score we do feel that these areas still need to be reviewed.  I will talk to these next time. 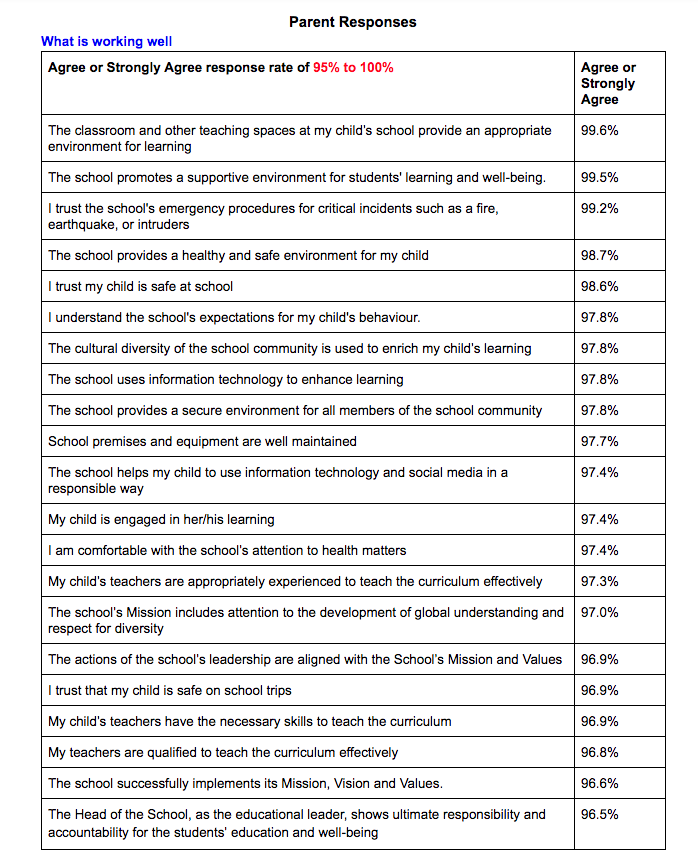 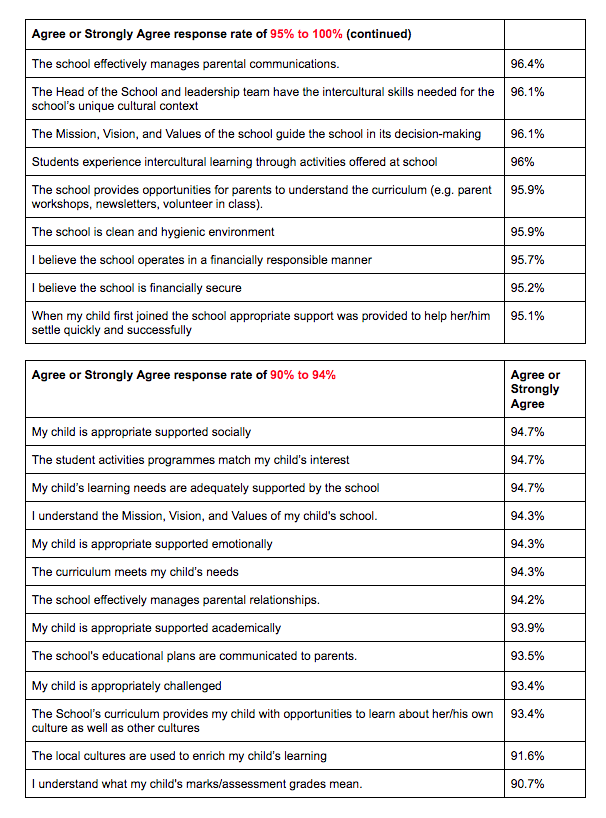 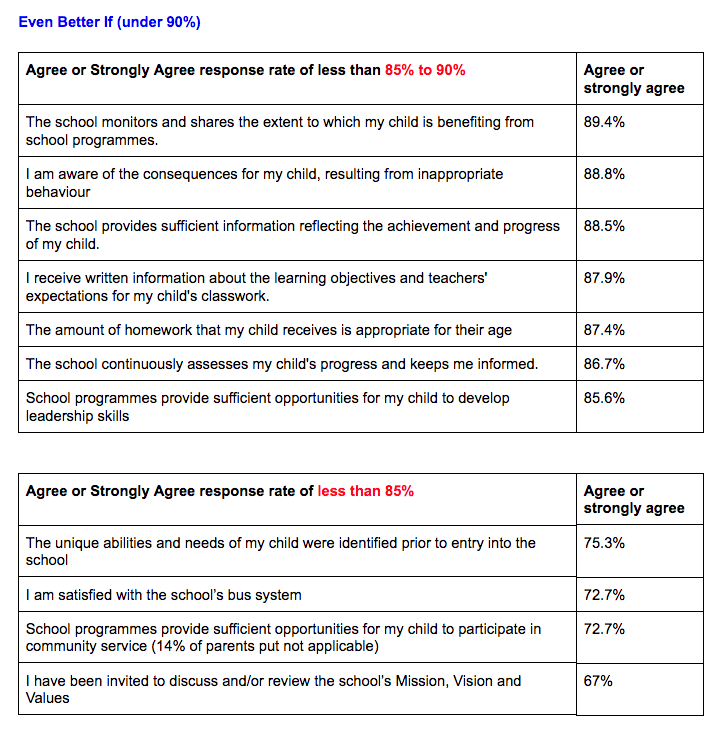 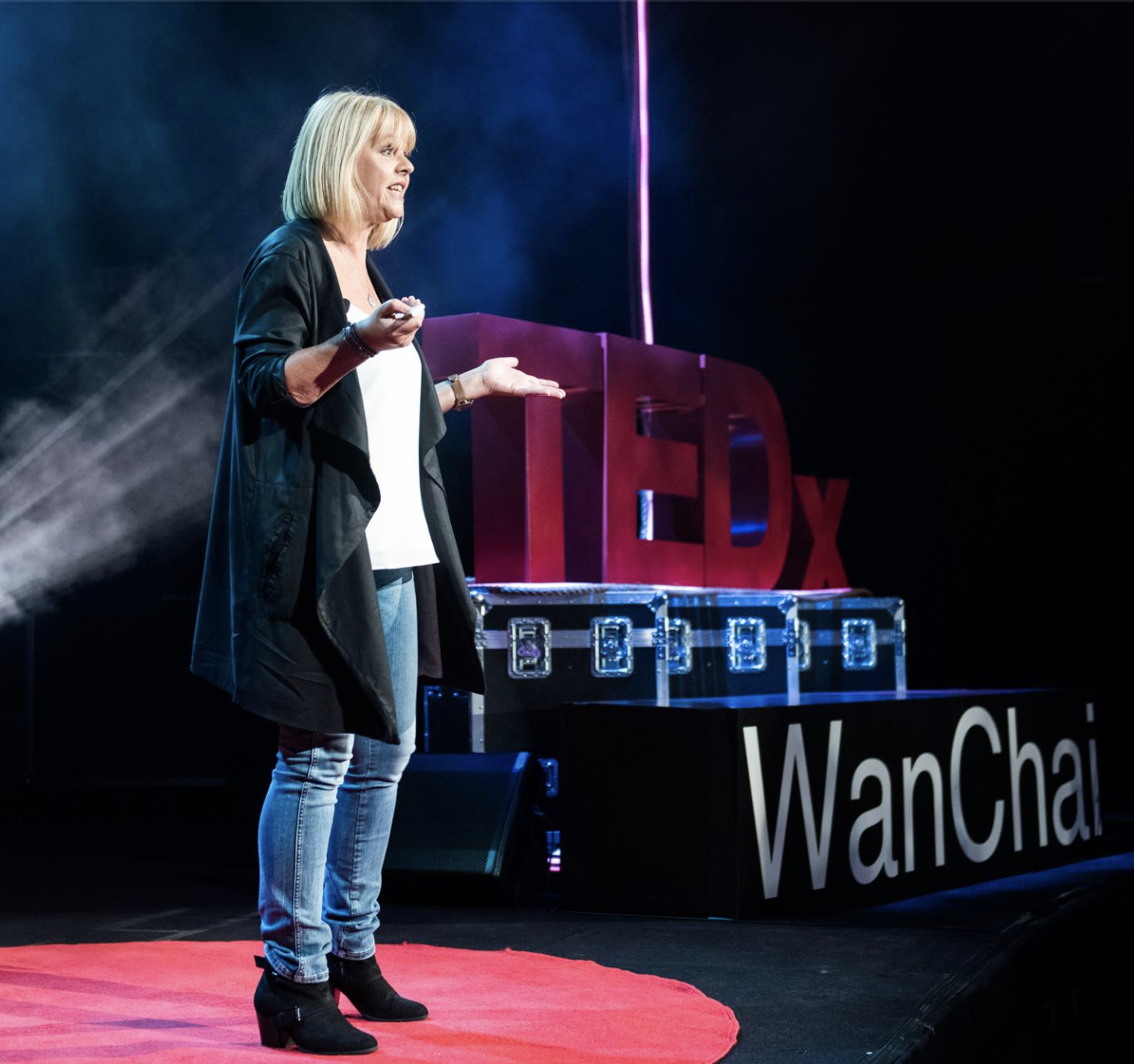 Last weekend our very own Jane Engelmann was one of the guest speakers at the Tedx Talk held at Wan Chai.

It went very well and the following write up by the organisers of the Tedx Talk says it all:

“Nothing could have prepared us for that finale. “If I had one wish it would simply be this: I wish I could kiss you goodnight.” The song is the composer and single mom Jane Engelmann’s way of saying thank you to a group of women who offered her their ultimate sacrifice: putting her children to bed instead of their own. The Unsung Heroes left the crowd in tears, all wanting to go home and kiss their children goodnight”.

There was not one standing ovation for Jane and the Unsung Heroes but two!

Jane continues to support and drive the Unsung Hero choir and everything that it stands for.   Jane is a very talented, caring and special human being and this was highlighted on Saturday when she spoke so well and clearly moved and inspired so many audience members.  We are proud and privileged to have Jane working at Peak School.

I just wanted to remind all parents that phones are not permitted to be used during school time at Peak School.  Children, who have an after school activity or such like, are allowed to have a phone in their bag in case they need to contact a parent or caregiver after their activity.

If we see a phone out of the school bag, we confiscate it until the end of the day.

I note with interest that France have announced today moves to ban phones from all schools.  This is a bold move for a country to make but the government have decided to try and push through this legislation as they feel the phones are a distraction for the children and are concerned about the amount of screen time the children are experiencing on a daily basis.  If successful, it will be the first country I am aware of to make such a move.

We are starting to notice more and more of our children are wearing them but an issue is parents contacting the children during school time and that is then requiring children to respond which is actually distracting them from the lesson.  I have told the staff to ask any child, who is wearing a watch and clearly communicating with someone during class time, to put their watch in their bag until the end of the school day.  We are only talking about a very small number, but experience would suggest that that number could potentially grow quite quickly so I wanted to make you aware of the school’s stance before it becomes a bigger issue.